Natalya was first encountered on The Rock in Bay City, and killed a KGB Agent who was about to shoot Crypto. When Crypto first caught a glimpse of Natalya just before she disappeared, he was dazed at her beauty before he shook it off and continued his mission to prevent Bay City's destruction by Agent Ivan Oranchov's nuclear time-bombs.

Later, after Crypto investigated an art gallery in Albion, he discovered that the statues that were unveiled contained the same spores that infected and mutated Oranchov in Tunnel network. Shortly after the statues exploded, Natalya arrived to help Crypto kill the infected humans. Natalya stated that she was a member of the KGB, but was a bit of a rebel, which Crypto was surprised at. What was even more shocking for Crypto, was that Natalya somehow had recognized him as the President of the United States.

Later, after he prevented the KGB from spreading the spores around Albion from Hyde Park, Crypto escorted Natalya to her car and then to her fellow Agent and lover, Sergei. After Crypto was knocked unconscious and interrogated at an underground lab by Reginald Ponsonby-Smythe, Natalya infiltrated and released the lock for the room that Crypto was in. Natalya didn't reappear until after Crypto and Ponsonby's fight. Natalya then told Crypto that she needed to find the hidden files inside the Soviet Embassy and talked him into creating a distraction (i.e., attracting the attention of the KGB and the Army). Once she retrieved the files, Natalya told Crypto to destroy the base so that the KGB wouldn't know that she had taken the files. She then went over the files, learned about "Project Solaris", and that the next bit of information was in Takoshima. In Takoshima, Natalya and Crypto found Dr. Go! and learned of the hidden KGB Base that was located in an active volcano. When they infiltrated the base, Natalya and Crypto encountered Milenkov via video feed. Milenkov then demonstrated the full effects of his spores on an intern, who transformed into a giant Godzilla/Gojira-like monster called Kojira. After he defeated Kojira, Crypto accompanied Natalya to Tunguska, the home of the KGB and location of the Tunguska Blast of 1908.

In the USSR, Crypto and Natalya sabotaged Soviet operations near the "Strange Base." Later Crypto discovered that another alien race had crash-landed on Earth: they were called the Blisk, who turned out to be the enemies that the Furons had supposedly destroyed millennia ago in the Martian War. They were also known as the Martians, though the locals seemed to think that they were strange Yetis or monsters. The Tunguska Strike of 1908 was actually a downed Blisk Warship that was thought to be a meteorite that crash-landed into the Tunguskan hillside. After he rescued Natalya from a Blisk Poison Bubble, Crypto met Milenkov face to face before he retreated to his base on the Moon, Solaris, in a Blisk Shuttle.

On the Moon, Crypto discovered that Project Solaris was actually a Blisk Super Weapon that was designed to bombard the Earth with spores and let the Blisk have control of Earth as an irradiated and water-logged planet. Crypto took on the form of a spokesman (similar to the first game) and convinced the Cosmonauts to go to war with the Blisk, after he told the Cosmonauts that the Blisk were going to take away their vodka. Crypto caused the American Moon Landing and collected Pox's OMG-WTF virus that was a killing mechanism for the Blisk. Crypto and Natalya battled for their various species to in order save Earth, and, after the Blisk Base was destroyed, the two were about to share a kiss. Milenkov then entered and shot Natalya in the back. Milenkov then revealed himself as a Blisk himself and Crypto fought and killed him.

After he killed Milenkov, Crypto relaxed in his Saucer while Orthopox appeared and told him that he had detected activity in the cloning pods—Pox then realized that Crypto had cloned Natalya. Lying next to him, Natalya appeared to give in to Crypto's lustful advances although he mentioned that he "made a few adjustments.”

Path of the Furon[]

In Path of the Furon, Crypto made numerous references to Natalya as the only human that he ever loved, before lamenting that the adjusted clone that he created only had a four year lifespan. For his part, Orthopox seemed more irritated by the fact that the emergency cloning chamber had been wasted on an inferior life-form.

It was revealed that Crypto and Natalya's falling out was caused when Natalya caught Crypto with a french maid in Belleville.

Natalya had short blonde hair and light blue eyes. In Bay City, Albion, and Takoshima, Natalya wore a black vested leather KGB Uniform. She had long black boots and matching gloves which covered most of her arms. In Tunguska, Natalya wore a fur dominant outfit that helped to resist the cold; an outfit that Crypto commented on almost immediately.

On Solaris, Natalya's outfit changed to a more science fiction based spacesuit, with a matching laser blaster. That outfit was mostly silver with a red collar placement and a red cod piece with a red belt. Natalya also wore a "fishbowl" styled helmet, which added to her science fiction look.

In Destroy All Humans! 2 Reprobed, her spy uniform is given a complete overhaul: It is now made of a black synthetic material with a zipper down the front and red accents on the sides. Her boots are now red as well, and she also has a spy gadget attached to her left wrist. Additionally, the hammer and sickle pin on Natalya's vest has been replaced with a belt buckle in the shape of a USSR star, making her design more symmetrical. 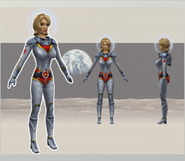 Destroy all Humans! 2 All Natalya Scans