Space suit with peices of armor throughout the years

Stealth, not getting what he wants, Meningitis, any person that makes him angry, The Master, being called green (Martian in the Japanese version)

Cryptosporidium, commonly known as just simply Crypto is a Furon warrior and the playable villain protagonist of the Destroy All Humans! series.

Crypto's most obvious trait is his taste for destruction, making him an effective soldier for the Furon Empire. Needless to say, he's very sadistic, taking pleasure from torturing human beings. While he started out by hating all things human, he mellows out by the time the sequels came out, no doubt in part due to spending years mingling with humanity (and even becoming romantically involved with a human female named Natalya). In the first game, he shows a mild perverted side when he's about to probe Miss Rockwell, but said perversion is exaggerated in later games, though this is probably due to having acquired genitalia.

When with others, Crypto is very rude. Between being very sarcastic, mocking, or simply threatening people, Crypto has few moments of honesty, usually when he's in serious trouble. Crypto is often inclined to killing those who he simply doesn't like unless ordered against such urges due to mission requirements. Despite his sociopathic traits, he does show that he cares about his allies. Crypto freaks out when Natalya dies on the Moon, and also mourns the Master when he fakes his death.

Crypto, being a soldier, is efficient with most weaponry. He shows a preference to an all-out offensive rather than stealth, though he is capable of such a strategy. He's also an exceptionally capable pilot, having only crashed twice; once when his Saucer was hit with a blast from a tesla coil, and when he was drunk "flying" in Nevada.

Crypto's mental abilities are also very advanced, due to being constantly upgraded by Orthopox and training under The Master.

Crypto's history is unknown up to the events of the games. Apparently, he has a mother, who according to him is very unloving. He worked with Orthopox for quite some time before coming to Earth. His story can be divided by the number of clones he's had.

The first Crypto clone to appear in the game. He is sent to Earth to find Furon DNA to save his race, but is accidently shot down by a missile in Area 42. He tries to resist capture after crashing but he collapses in front of several soldiers. His weapons and Saucer are taken, allowing the Majestic to develop new weaponry. 136 is questioned, dissected, and it leads to the unlocking of the Furon genes and leading to the creation of the Majestic's mutants. His capture is the reason 137 urges Pox to come to Earth. His remains are later destroyed by Crypto-137, just so no more experiments are committed on his "brother".

Cryptosporidium-137 first landed on Turnipseed Farm in search for the dominating species on Earth. He headed towards Rockwell in order to infiltrate and investigate about the human's culture, though this led to the discovery of experiments by the military on local cows. Future trips to Santa Modesta and Area 42 led to the discovery of the Majestic. 137 also found out about 136's fate and swore revenge. After destroying most of Area 42, Crypto headed towards Capitol City in order to hunt down General Armquist but crash landed in Union Town.

Unlike 136, he survived this experience. After killing Armquist and later on assasinating the president, he goes after Silhouette in order to stop the Majestic from interfering with Furon activities. Following Silhouette's death, 137 posed as the deceased President Huffman and gained control of the United States. He had then proceeded to use this power in order to convince the people of the Earth that the commies caused all this trouble, which is simply a ploy used to attain more brain stems.

This incarnation of Crypto is arguably the most violent and sadistic, and talks in an almost-monotonous voice most of the time.

138 was active from 1969 to sometime before 1979. He was the first Furon to have fully functional genitalia, which made some drastic changes in his personality. KGB spies found out about the Furon control over the United States, and thus planned the 138's assassination in Bay City and the destruction of the mothership. Crypto escaped with Orthopox, now dubbed Holopox, and began a quest to bring down the KGB. Crypto was forced to cooperate with Russian spies Natalya Ivanova and Sergei, who wanted to uncover a conspiracy hidden within the KGB.

With Crypto's help, the Blisk were discovered, along with their plan to bombard the Earth with nukes in order to remake it into ancient Mars. Crypto was finally able to destroy all the Blisk, though it came at the cost of the lives of his former allies. However, he ended up cloning Natalya.

During his campaign, 138 was replaced as president by a robot Orthopox had built. This Crypto is a lot different to Crypto 137, showing a humorous side and making jokes, usually either offensive or sexual. Also, Cryptosporidium 138 is the only Crypto in any of the DAH games with a love interest, in this case it is Natalya, who he loved to the point of cloning instead of Orthopox/Holopox.

This clone was created in the mid-to-late 70's after 138 crashed the saucer while drunk. After the crash, Crypto 139 opened a casino known as the Space Dust to use as a front to gather DNA. He became native. He also went to war with a local mob family known as the Molinari Brothers, who owned the casino Nero's Palazzo.

After ruining the Molinari's businesses in Las Paradiso and their connections to the Italian Mafia, Crypto 139 and the casino are attacked by Nexo warriors, and after defeating them, destroys multiple buildings, including Nero's Palazzo and the Space Dust.

Having travelled to Sunnywood, Crypto attempts to get to Curt Calvin, the leader of an alien-worshipping cult, who he believes is trying to botch his mission. After making 'first contact' with the humans of Sunnywood, Curt is revealed to be a human and Crypto is attacked by more Nexos. After defeating them, he is shot with a dart and brought to Shen Long, where he gets his answers from a Furon Kung Fu master, known as The Master.

This "Master" begins training 139 in the art of psychokinesis. This training allows Crypto to harness the full power of the Temporal Fist, allowing him to create a much more powerful PK push while Time Stop is active. After his training, The Master gets Crypto to chase down Saxon's right-hand man, Rolo (often pronounced Roro by locals and Crypto) to get The Master's Jade Talisman. After retrieving the Talisman, The Monastery is attacked and defended. Crypto then takes the fight to Saxon, destroying his businesses. The Master then tells Crypto to hold a tournament to lure out Saxon, only to trick Crypto into letting The Master fight Saxon himself. Saxon then kills The Master and Crypto then chases Saxon. Saxon then pulls out his ultimate weapon, a Nexos Dragon, and fights Crpyto. After his defeat, Crypto is surrounded by more Nexos and Saxon reveals that he has no idea what they are.

After Saxon is killed, Crypto and Pox escape and head to Belleville, France, in order to get to Francodyne, a company Pox believes are cloning the Nexos on Earth. Crypto still ends up with loose ends, and finally returns home to find some answers. After realizing that Meningitis has created artificial Furon DNA, he is enraged due to his mission being pointless. During this, Pox retrieves a new body from a Furon cloner and ends up having the body of a monkey.

After he kills Meningitis, the Jade Talisman is revealed to be a one-off cloning device, cloning The Master. It is revealed to him that his old Master was the true cause of his issues The Master is then defeated with ease after Orthopox, with his new monkey body, flicks him into a wall, killing him instantly. His Commander, Orthopox, then ascends the throne and Crypto returns to Earth to continue his mission, after learning that the Furon DNA doesn't work.

Little is known about this clone but he appears in multiplayer games as the second player. In DAH!2 he wears a red suit, and in Big Willy Unleashed he just has a red arrow floating above his head. In Path of the Furon, the first player Crypto wears a suit with blue replacing the brown areas, and the second player with red replacing the brown areas. 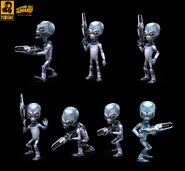 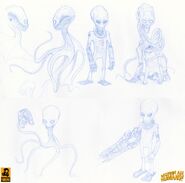 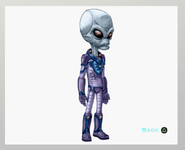