Destroy All Humans Wiki
Register
Don't have an account?
Sign In
Advertisement
in: Unsourced quotes, Blisk, Races,
and 8 more

"They’re huge, hideous brutes! With giant claws and withering halitosis! They have a single hive-mind and an imperviousness to radiation! They take to it like a pig to mud! Imagine a cockroach mating with a lobster!"
―Orthopox.

The Blisk, are a large, aquatic sentient species from Mars, who became an endangered race after being nearly wiped out by the Furons.

The Blisk didn't have imperial ambitions at the time that the Furons came to Mars. When the Martian War started, the Blisk were able to cripple the Furon forces and the war escalated to the point where the Furons developed stronger radioactive weapons.

The Blisk were nearly wiped out, and Mars was turned into a dead world, one that was devoid of water. The only surviving Blisk were aboard a Blisk Warship which crashed on Earth, in Tunguska, Russia, on June 30, 1908. The Blisk then over time took over the Soviet Union (USSR) sometime after the Russian Revolution.

Although not confirmed, it was generally assumed that the Blisk were the "other aliens" who were responsible for destroying the Majestic agencies around the world with the exception of the American and British agencies. The reason why those two survived while others didn't was not known, although Crypto later wiped both agencies respectively.

At one point, the Blisk realized that Humans were the key to the survival of the Furons who faced extinction. A plan was then developed to cooperate with the Soviet Union, in order to reach the Moon, set up a base, bombard Earth with Blisk spores and radiation, and wipe out humanity, and the Furon's last hope for pure Furon DNA.

The Blisk were rediscovered by Crypto 138, in 1969 led in secret by chairman Milenkov. The Furon soon began a campaign to destroy the Blisk Warship in Tunguska, and later stop the bombardment of Earth. The Blisk Base on Solaris was destroyed (when Crypto Body Snatched Leonid, started an uprising of the Cosmonauts, and then ventured in to destroy the hive with Natalya) and Milenkov was killed by Crypto.

Following Milenkov's death, the remaining Blisk tried to send an emergency message to any alien ships that passed by and requested rescue. The Blisk's message was disabled, replaced with a Furon transmission, and the remaining Blisk on the Moon were hunted down and killed. However, Blisk were still found in the wilderness near Tunguska on Earth, but were left leaderless.

The Blisk were large, crustacean-like lifeforms, suited to their once-aquatic homeworld of Mars. The Blisk were bipedal, and their small heads were located on the top-center area of their bodies. The Blisk had tough, dark-colored armor which made them impervious to radiation and most of Crypto's Weapons. The Blisk's arms ended in claws which fired a green beam, though whether that was part of their standard anatomy or a weapon implant remained unknown.

The Blisk possesed a hive mind, though each Blisk was able have some degree of independent thought. The Blisk resisted many Furon psychic attacks such as Psychokinesis and mental manipulation. Curiously, the Blisk appeared to be able to infiltrate human society and took a human form through unknown means.

There was also a small group of Albino Blisk, who were often mistaken for Yetis, a legendary creature from the Himalaya Mountains. The Albino Blisk were bigger and much stronger than regular Blisk, which made them even more of a threat. However, they were usually found far away from the other Blisk and were only located in Tunguska.

Not much was known about Blisk society aside from the fact that they operated in a hive-like structure, and originally lived in the radioactive aquatic environment that was once Mars, until the Furons reduced their planet to an endless desert.

When they spoke, Blisk drones used the terms "we" or "us" but occasionally slipped in times of danger when they referred to themselves as individuals. The leader of a Blisk hive appeared to be exempt from that quirk and referred to himself only. It was mentioned that the Blisk Language was quite similar to what Humans referred to as the “Russian Language” (according to Milenkov, that was because the Blisk, like the Furons, also stopped by Earth for "Shore Leave").

After integrating into Soviet society, Blisk seem to have partially immersed themselves in Human culture, based off of Scans. As they reference eating Human food such as jellybeans, and think about Human movies, music and pop culture.

The Blisk, despite appearing to be simple brutes, mastered radioactive and chemical warfare, along with genetic engineering and most of their technorganic advancements were powered by radiation.

Their hardware was made of a substance that was similar to the Blisk's own armor, and their weapons released radioactive beams of energy. Ironically, one of the methods for destroying Blisk weapons was overloading it with radiation. One huge development was the creation of Blisk spores which turned a human into a Blisk Mutant.

Blisk Warriors are the primary defenders of their race. They have a tough, dark-colored exoskeleton which makes them impervious to radiation and most Furon armaments. They are also protected by a Defense Shield that can be disabled with the Zap-O-Matic.

Their arms end in claws which are able to shoot a radioactive energy beam, though whether this is part of their standard anatomy or a biological implant remains unknown.

The Yeti is a rare albino variant of Blisk Warrior. They may not be a naturally occurring breed, however, as it’s suggested that they are the result of Soviet Union experiments.

Found only in Tunguska, their energy beams are stronger and their shields are much more durable than those of a standard Blisk Warrior. In battle, Yetis hurl insults and taunts in place of the normal battle cries of lesser Blisk Warriors.

Yetis only spawn after the odd job "The Abominable Yeti,” in which Crypto is tasked with heading into the Tunguskan forest, not too far from the Blisk Warship, and fighting a Yeti, which is accompanied by two Blisk Mutants. After killing the albino Blisk, other Yetis will start to appear in a few remote areas of Tunguska.

Blisk Mutants are Humans who have been infected by Blisk Spores, which have mutated them into horrific, feral lifeforms.

Blisk Mutants have the ability to spit blasts of toxic spores from their mouths, and possess extremely durable skin that is resistant to Furon weaponry. When in close combat, they use their sharp and deadly claws to down their opponents.

Blisk Spores are primitive organisms that produce a greenish gas that infects Humans almost instantly on contact, transforming them into Blisk Mutants.

These spores even seem to attack Crypto, but can be destroyed by a single zap from the Zap-O-Matic or with a few shots from the Disintegrator Ray. 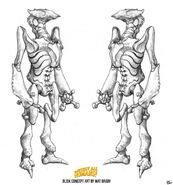