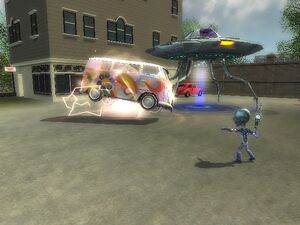 Bay City was the first area in Destroy All Humans! 2. Bay City was a city that was based on San Franciso and was located on the Western Coastline.

The first event in Bay City happened after the Furon Mothership was destroyed. The KGB ambushed Crypto 138 in Golden Gate Park and attacked him until Crypto killed them and met up with Orthopox in Hashbury.

The second event was between the Furons and the KGB. Coyote Bongwater bought a fleet of around 15 blimps, filled them with Revelade, and planned to fumigate Bay City with Revelade. Crypto destroyed every blimp with the Saucer before the air was saturated.

Crypto, after he destroyed the blimps, learned from Prudence Kane that Bongwater was going to dump Revelade into the bay via trucks. Crypto quickly destroyed the trucks while they were parked in the camp (behind the stage in Golden Gate Park). Crypto then continued by launching an assault on the Old Fort, where he killed Bongwater and a group of KGB Agents.

After Bongwater was killed, Crypto sneaked into Alcatraz, where he learned that the KGB were going to use four nuclear time bombs, which were carried in vans, to destroy Bay City. Crypto killed an agent who carred information on where the vans were, then dropped the vans in the water. Once the nuclear threat was neutralized, Crypto destroyed Alcatraz with the Saucer.

Crypto did several odd jobs for SGT. Fauxhall. One was returning a draft dodger to the Wharf, who was holed up on Coit Mountain. Around the mountain, armed Hippies (so-called pacifists defending the dodger, Clayton Cartwell Jr.) fought it out with the Bay City Police. The Hippies were divided into groups of 4-6, armed with Shotguns, and hat machine gun-armed vans. The second mission was a major battle: Crypto, supported by Soldiers, had to kill Private Danza, who ran an arms smuggling ring in the Army. The soldiers had three redoubts along the path up Wharf Mountain (armed with bazookas and grenades, and supported by ground turrets), and at the summit a redoubt that held EMP Mines, Gun Turrets, traitor soldiers, and Private Danza. Crypto had an understocked armory, so that battle was a nightmare (Note: that was assumed that the player did the Odd Job as soon as possible and on foot).

The Bay City Police, led by Officer Rudolf, launched a raid on The Cult of Arkvoodle in Bay City. Crypto held them off and kept the Police from destroying every tent. Later Officer Rudolf hired Crypto to kill a Cultist who claimed that the police used excessive violence (which they did: the cult did not hurt anyone). The Cultist was guarded by police. When the Cultist arrived at a hotel (which was guarded by the police) Crypto killed him.

The KGB turned out to be running the arms smuggling ring, and HoloPox had Crypto clear out Alcatraz to stop their plans again. There were dozens of KGB, scattered ground turrets, and EMP Mines, which made the mission dangerous, but Crypto succeeded.

Old Fort: A fortress on the northwestern side of the Bay and housed a secret KBG Base. The base was destroyed when Crypto attacked it and searched for Bongwater.

Old Fort Tunnel: A tunnel that cut through a slope, and was west of the Old Fort.

Golden Gate Park: A park south of the Old Fort, where Hippies gathered in communes. The park had a stage and speakers for part of a Hippie Convention (part of the Revelade ordeal between the Furons and KGB), a small base west of it with tents, Revelade trucks, Hippie vans that were outfitted with machine guns, and KGB Agents (destroyed by Crypto after the Convention), and an Arkvoodle Cult Camp. Unlike Hyde Park in Albion, Golden Gate Park was dotted with tents that were set up by the Hippies.

Hashbury: A neighborhood south of Golden Gate Park and home to the "undesirable" citizens of Bay City: Hippies, drug addicts, thugs, etc. Hashbury was Bongwater's Revelade distributing spot, and also had a fenced in Landing Zone and Record Store.

Coit Tower: A monument that was built for the Bay City Fire Department and a potential communications hub (the Furons used it as a transmission tower). Coit Tower was on the peak of Coit Mountain.

Coit Mountain: A high mountain that Coit Tower sat on. The road snaked around the mountain slopes and was a high-traffic area for Pedestrians and the Police.

Coit Tower Tunnel: A tunnel that went through a slope near Coit Mountain.

The Eastern Lowlands: An unnamed neighborhood that was parallel to Hashbury.

The Wharf: A port north of the Eastern Lowlands. In the south, there were two large buildings, two piers (one on the western side, one on the eastern), and to the north, Wharf Mountain. The western pier had soldiers stationed there.

Wharf Mountain: A mountain parallel to the Old Fort. It was abandoned, but once, arms smuggling soldiers in the Army set up a base there, with three redoubts that blocked the path to the top of the mountain and a large fortified area on the top.

The Rock: An abandoned prison that the KGB used as a base. It was attacked twice by Crypto: once in a spy mission that resulted in a shootout and destruction of the compound, and the second time it was attacked because the KGB had rebuilt it and used it as the base for the arms smuggling ring in Bay City.

Bay City Bay: A bay in Bay City that created a donut shape, except without a coast to the north. Alcatraz was in the middle of the bay. The only way, other than the Saucer, to cross the bay was by going to the Wharf and flying by Jetpack to Alcatraz. The bay may have been polluted by nuclear waste, as the vans that carried the nuclear time bombs fell in the water.